Surya Namaskar: A Step-By-Step Guide to Sun Salutations (For Beginners!)

Ah, Surya Namaskar. The ultimate yoga flow that serves as the foundation for all other yoga poses.

Surya Namaskar, casually named Sun Salutation in English, is a set of 12 yoga poses that are done in traditional hatha yoga and ashtanga yoga.

And basically any other asana practice.

These movements not only serve as excellent physical exercise (it’s basically a slow-motion burpee, after all), they also serve a moving spiritual practice that is guided by the inhalation and exhalation of the breath.

It’s kinda easy to screw it up during your personal asana practice and even easier to overlook when it comes to yoga philosophy.

So I wanted to break it down here so that you can reap the many benefits of Surya Namaskar during your own asana practice right from home. 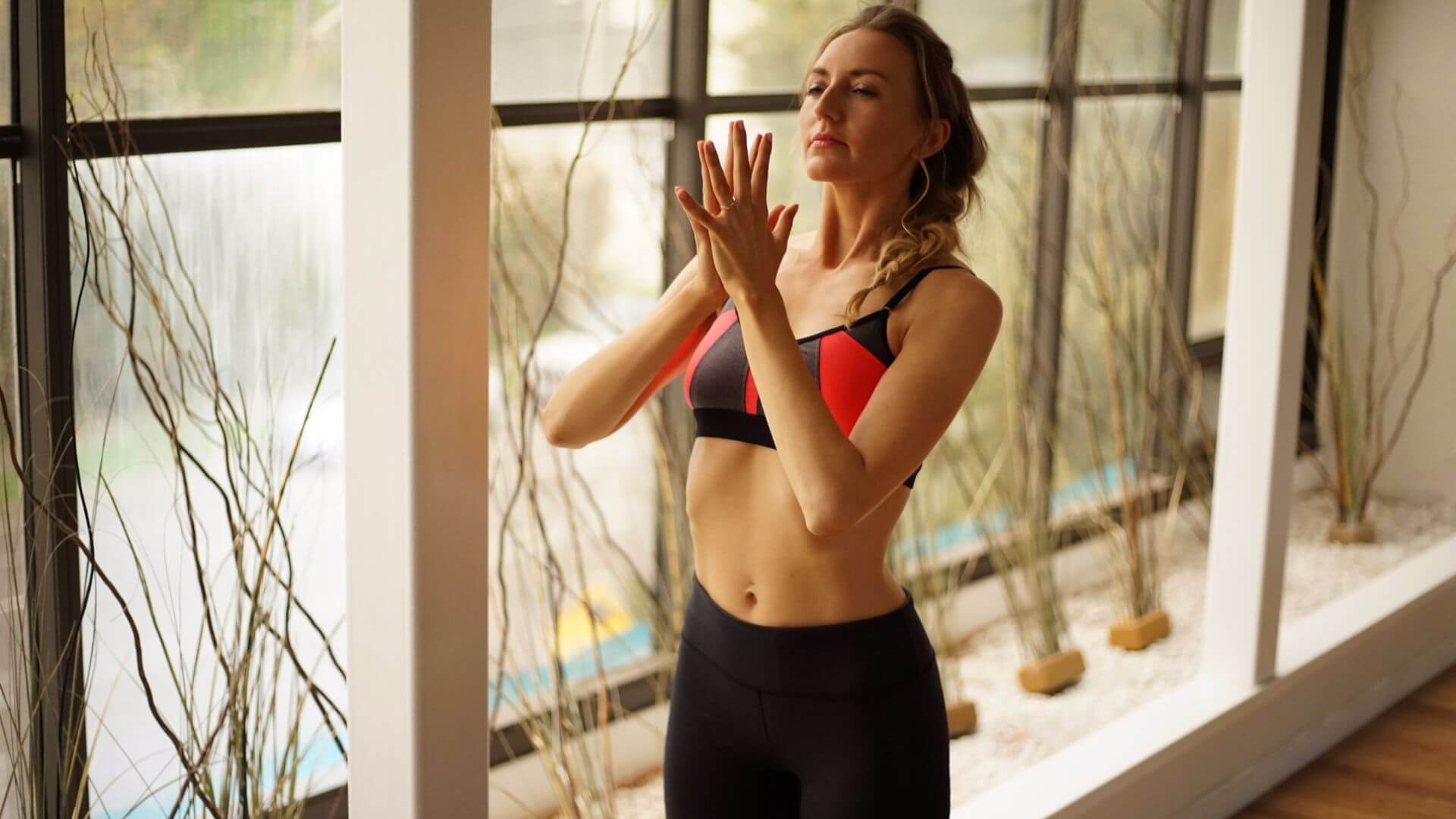 Where Does Surya Namaskar (Sun Salutation) Come From?

While Surya Namaskar yoga isn’t necessarily mentioned in ancient texts, it has long been practiced in ashtanga vinyasa yoga styles.

Namaskar is Sanskrit for ‘bowing down to the sun’, which is where we get the term Sun Salutation.

…but this asana sequence nods to the all-knowing sun within us, as well. In fact, that’s why each sequence ends with prayer pose with our hands at the heart, where we honor the light and truth within ourselves.

In yoga, our truth and knowledge come from the heart, where our light resides. While in western philosophies a lot of our knowledge and sense of self comes from the brain, the brain is only secondary to the heart in ancient yogic philosophy.

Because the mind is only a reflection of what’s in the heart.

As for the actual date of origin for Surya Namaskar, it’s a bit uncertain when it was first incorporated into traditional hatha yoga. Some say that namaskar yoga served as an important ritual that was complete with bija mantras, mudras, and offerings. Others say that it was only invented in the early 20th century as a yoga sequence to increase blood circulation during an invigorating asana practice.

Whatever the origin, it has since found its way into every hatha yoga and ashtanga vinyasa yoga class the world over. Just like with any physical exercise, there are tremendous health benefits that come with practicing namaskar yoga. Some of the most notable benefits include

But those are just the touted benefits of the namaskar yoga flow where each of the yoga poses offers its own set of benefits, as well.

It’s like a powerful moving, breathing meditation. With each inhalation and exhalation, I’m given the opportunity to direct my energy and focus on the yoga poses that I’m moving through.

It’s like my own personal prep for a seated meditation or mantra practice.

And let’s not forget that burpee-esque quality. Unlike CrossFit groupies, this dynamic flow is not likely to put you at risk for injury but it definitely is likely to kick your butt (and arms and shoulders) into serious shape.

How to do Surya Namaskar (Sun Salutation) in 12 Steps

It’s pretty easy to lay out the steps for Surya Namaskar, but that would leave out a lot of the important alignment cues that generally come with it.

So I thought I’d put those here so that you can perfect your Sun Salutation and incorporate them into your own yoga asana practice right from home.

So the first thing I suggest is to stand with your feet hip-width apart, especially if you’re new to yoga.

You don’t even need to have the toes touching. Though some videos might say that the toes are meant to touch, I think it’s better to have the feet hip-width apart and parallel, spreading through the toes.

So on the in-breath, because everything in yoga is related to the breath, reach the arms up over your head.

And then I would suggest just taking the arms about 45 degrees instead of taking the palms of the hands to touch because that can squish the shoulders up towards the ears. To prevent that from happening, simply keep your arms and hands separated.

On the out-breath, fold forward. You don’t have to touch the floor. You could even just hold opposite elbows as you hang down. If you need to, allow for a slight bend in the knees just so that your spine can hang towards the floor.

On the in-breath, come up to a flat back. Place your hands on the upper part of your shins or even your knees, if needed. The point is to allow your spine to lengthen forward. Imagine someone gently pulling your shoulder blade back towards your tailbone and another person gently pulling your skull out in front of you.

From the flat back, step back into plank pose. I always tend to lead with my left foot when I do this, but you can choose whichever foot you’d like to lead with. It’s probably best to alternate which foot you lead with in your yoga practice!

If it’s too much for you, you can drop your knees to the floor. Just be sure that your knees, hips, and neck are all in a straight line.

One thing I learned from my Iyengar teacher in Rishikesh, India is to slightly push yourself forward, onto the tips of your toes, and to slightly tuck your tailbone under. This will help your alignment and correctly engage your core.

This pose is tricky, but it’s essential to properly bring you from plank pose to cobra pose.

Bend the knees and gently bring them to the floor (if they aren’t already there) and move the hips back slightly. Slide your chest forward and place both it and your chin on the floor.

This part is a bit funky, but raise your booty a little bit like you’re in puppy pose.

At this point, you should have eight points touching the floor: your two hands, two feet, two knees, your chest, and your chin.

From the previous position, push your chest forward and up, creating a slight backbend.

A lot of times, students want to lift their chins up as high as they will go in this posture, as if the higher their chins are, the enlightened they will become.

But that’s not totally necessary.

Instead, focus on bringing your shoulder blades together so that your chest is open. Roll your inner thighs together, as if someone is pulling them up and away from the ground. Bring your shoulders away from your ears and allow your neck to gently lengthen.

With straight arms pressed into the ground, push your chest backward into downward facing dog. I like to keep my feet and legs hips width distance apart to give my chest and shoulders some space in this posture. If this is too tight for your hamstrings, you can bend the knees.

Pull your belly button towards your spine and your tailbone toward the ceiling.

Keep your fingers spread out wide with all of the small muscle groups in your hands engaged so that your wrists are supported in this pose.

From downward-facing dog, bring your right foot forward and place it on the ground between your hands. Drop your left knee to the floor.

Press the hips down toward the floor direct your gaze upward.

Come back to your standing forward bend and use your core strength to move your chest and belly closer to your legs.

Raise your arms over your head towards the ceiling and stand tall. Be mindful of your shoulders, making sure that they aren’t scrunched up in your ears.

Bring your hands together and down toward your chest, giving thanks to this beautiful yoga sequence before settling into mountain pose.

Keep your legs engaged and your arms charged as you stand tall, connected to the Earth beneath you.

And there ya go! Surya Namaskar in 12 steps. It’s the ultimate sun salutation that can be done in any yoga sequence and even before you sit down for meditation. Let me know in the comments how it goes for you!