What is Kriya Yoga? The Philosophy and Practice 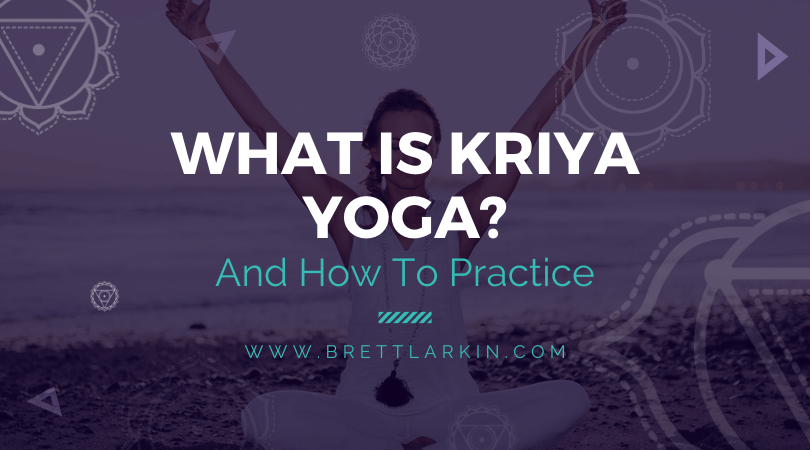 If you’re anything like me, then your personal yoga practice has naturally found its way to the spiritual practice that yoga has to offer.

And let me tell you from experience: that is where the real magic happens.

But jumping from a basic asana practice, where you move through each yoga posture for physical benefits, to a spiritual practice as outlined by the kriya yoga tradition can be a little confusing.

So I wanted to break it down for you so that you can give it a try right now. If you don’t like it, then there is no harm done.

But if you do like it, then get ready for some major spiritual shifts in your life. Let’s dig in.

What is the meaning of Kriya Yoga?

Kriya yoga is often referred to as the “Yoga of Action or Awareness”. It is an ancient meditation technique that uses pranayama (breathwork), mantra (chanting) and mudras (spiritual hand gestures) to rapidly accelerate spiritual growth. The ultimate goal of a kriya practice is to achieve spiritual awakening or enlightenment (aka Samadhi).

Although an ancient technique practiced in India for centuries, kriya yoga was not introduced to the west until the 1920s by Paramahansa Yogananda. The practice gained worldwide attention when mentioned later in his book, Autobiography of a Yogi, where he defined kriya yoga as “union with the infinite through a certain action or rite.” In his book, Yogananda says that kriya yoga is the most effective practice in yoga for personal evolution by increasing access to subtle energy and channeling it in more direct ways. However, it was only intended to be taught on an individual basis to students who had received a proper kriya yoga initiation by an established guru (or, basically, a kriya yoga master).

For this reason, you are not likely to find many books with kriya yoga teachings, but as interest in kriya yoga continues to grow, there are more and more resources and teachers available online to learn with.

The kriya technique often includes a combination of

With this daily practice (sadhana, in Sanskrit), the yogi disciple can achieve inner peace and oneness with cosmic consciousness (in yogi terms, “god”).

Where Did The Kriya Technique Come From?

This ancient technique has been around for thousands of years and is referenced in Patanjali’s Yoga Sutra text as well as mentioned in the Bhagavad Gita by Lord Krishna.

So the kriya technique has been around longer than hatha or vinyasa yoga itself.

It was originally designed as a comprehensive spiritual path with step-by-step instructions on how to use the yoga practice to get closer to God. In fact, according to yogis like Paramhansa Yogananda, this ancient technique was known and practiced even by Jesus Christ and St. Paul. Any disciple of God, they say, had a daily practice of kriya meditation that was paired either with a certain breathing technique, a mantra, a yoga posture (asana), or all of the above.

In this way, the kriya yoga tradition served (and still serves) as a comprehensive spiritual path to help you focus your energy on your relationship with God.

The word “yoga’, is a Sanskrit word that can be defined as “union”. Beyond asana – which is only 1 limb of the 8 limbed path – yoga is the reconnecting or reuniting with the infinite, divine or universal consciousness. It is, essentially, the realization of our inherent wholeness.

While traditional yogis would dedicate their entire lives to the 8 limbed path, most of us in the 21st century prefer to create a daily practice that is based on kriya yoga tradition.

In addition to the 8 limbed path of Ashtanga or Raja yoga, there are other effective systems of yoga to help us achieve universal consciousness. Many of these practices like hatha, vinyasa, or restorative work with the energy of the subtle body indirectly, whereas the practice of kriya yoga is much more direct.

Any practice can be dangerous without proper knowledge and preparation. Many kriyas include mudras (hand gestures or configurations of the body) and may require knowledge of the bandhas (energy locks). Many kriyas are built upon more advanced practices, so learning the proper techniques often requires personal instruction.

Furthermore, kriya yoga is a powerful practice that allows practitioners to work with energy directly. Some kriyas require great preparation before practicing as well as grounding and integration after. This is why it is so important to find an experienced kriya yoga master or guru to guide you if you are new to this ancient yogic practice.

If you are a yoga teacher interested in teaching kriya or any style of yoga, I always recommend to the students in my online YTT programs to embody any practice for a measure of time before teaching.

What Are the 6 Kriyas?

The 6 kriyas are cleansing techniques called Shat Kriyas. The practice of Shat Kriyas cleanses the internal organs allowing balanced pranic flow (life force energy) between Ida and Pingala nadis (major energy centers). This balance allows you to attain physical and mental purification and balance both within your kriya practice and into your life. The 6 Shat Kriyas are:

Many of these cleansing techniques are very powerful and should be practiced under the instruction of an experienced teacher.

Shat Kriyas are also used in the science of Ayurveda to balance the three doshas.

Curious about Ayurveda and your doshic constitution? Check out What is the Ayurvedic Diet to learn more about the principles of Ayurveda, the doshas and to take a dosha quiz.

Is Kriya Yoga the same as Kundalini?

Although both kriya and kundalini are referred to as the “Yoga of Awareness”, they differ from each other in their purpose.

As mentioned earlier, kriya yoga is a term first introduced by Paramahamsa Yogananda and represents a style of yoga advocated by him.

Kundalini yoga is a more physical and mental practice that aims to purify the body and mind as a means to achieve a state of spiritual absorption.

Finding an experienced teacher online or in-person is your best bet to learning Kriya Yoga techniques safely. If you’re interested in kriya yoga and want to get started, check out my 40-day kriya class and workshop to learn more and get started!

Still not sure what to think about kriya yoga? Then give one of my online kriya yoga classes a try. I recommend dedicating a full 30 days to your kriya practice to see how you feel with kriya yoga in your life. Then you’ll know for certain what it’s like to practice kriya yoga.